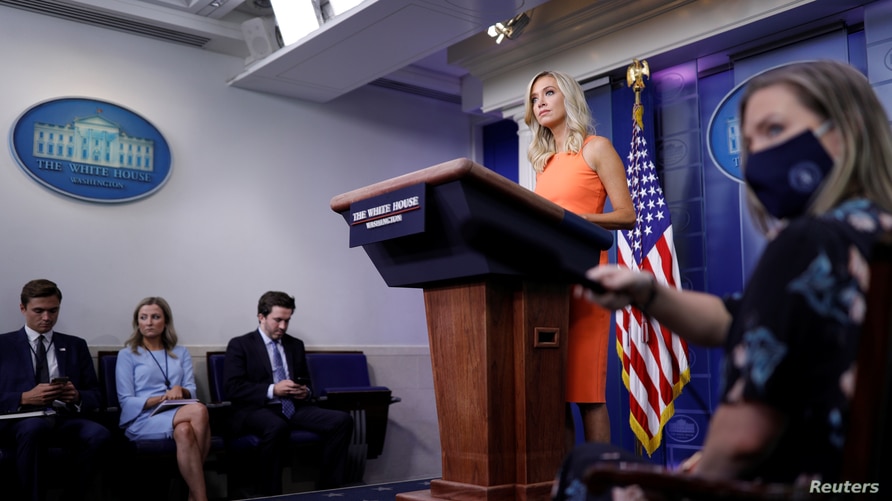 As published by VoA by Steve Herman

WHITE HOUSE – The White House is on the defensive about President Donald Trump not being briefed on reports that a Russian military intelligence unit offered bounties to Taliban militants in Afghanistan to kill U.S. soldiers.

“Intelligence is verified before it reaches the president of the United States. And in this case, it was not verified,’’ White House press secretary Kayleigh McEnany said Monday when reporters asked why the president was not informed.

The New York Times reported Monday night that according to two officials, the information was in the president’s daily brief in late February, days after Trump ousted Joseph Maguire as his acting director of national intelligence.

Chief Pentagon spokesman Jonathan Hoffman issued a statement late Monday saying the Defense Department “continues to evaluate intelligence” about Russian malign activity against the United States and coalition forces in Afghanistan, but that so far it has “no corroborating evidence to validate recent allegations found in open-source reports.”

Ratcliffe and CIA Director Gina Haspel both released statements late Monday, defending the handling of the intelligence and criticizing the leaks to the media.

“The selective leaking of any classified information disrupts the vital interagency work to collect, assess and mitigate threats and places our forces at risk. It is also, simply put, a crime,” Ratcliffe said in his statement.

“We are still investigating the alleged intelligence referenced in recent media reporting and we will brief the president and congressional leaders at the appropriate time,” he said.

Haspel said that while initial intelligence reports “often require additional collection and validation,” such information is “shared throughout the national security community — and with U.S. allies — as part of our ongoing efforts to ensure the safety of coalition forces overseas.”

Two of the lawmakers, Congressmen Michael McCaul of Texas and Adam Kinzinger of Illinois, who were briefed Monday, said in a statement they were informed of “an ongoing review to determine the accuracy of these reports, and we believe it is important to let this review take place before any retaliatory actions are taken.”

A group of Democratic Party lawmakers is scheduled to be given a similar briefing by the White House Tuesday morning.

House Speaker Nancy Pelosi wants Haspel and Ratcliffe to give the full 435-member House of Representatives a briefing on the issue.

“My call to each of them was to follow up on my formal request for a full House briefing on the intelligence surrounding Russian bounties,” Pelosi’s statement said.

“I reiterated that a primary purpose of the intelligence community is force protection. Similarly, as members of Congress, our priority is to keep our men and women in uniform safe. Many serious questions remain regarding what the White House is doing to address threats to American and allied troops and to hold Russia accountable,” the statement said.

“We were told that he (Trump) was not informed about the intelligence,” Mac Thornberry, the ranking Republican on the House Armed Services Committee who attended the meeting, told “PBS NewsHour.” He said that White House officials, however, did begin to work on response options in case further verifying information came forward.

The Texas congressman said his “default position” is that the president should have been informed of any possible threats against U.S. military personnel because “that’s got to the rise to the top.”

Trump tweeted Sunday that he was not briefed.

“Intel just reported to me that they did not find this info credible, and therefore did not report it to me or @VP,” the president said on Twitter, referencing Vice President Mike Pence.

The CIA and Ratcliffe should immediately brief all 100 senators, said Minority Leader Chuck Schumer on the Senate floor Monday afternoon, saying that Trump doesn’t seem as outraged “as you think he would be if in fact the intelligence community had this vital and important information and had not briefed him.”

Schumer, of New York, added, “Something doesn’t smell right here, especially when we have a president and an administration that has a great deal of trouble telling the truth.”

Former CIA analyst Aki Peritz told VOA he finds “it hard to believe that this information was not generally disseminated” across the intelligence community.

Peritz, now with the American University School of International Service, explained this would not be such a sensitive secret that members of the CIA, Defense Intelligence Agency, U.S. Central Command and the State Department would not have known about this intelligence in some capacity.

The New York Times was the first to report that U.S. intelligence officials had concluded months ago that the Russian unit, which has been linked to assassination attempts and covert operations in Europe aimed at destabilizing the West, had carried out the mission in Afghanistan last year and that he had been briefed about it in late March.

According to The Washington Post, U.S. forces suffered 28 deaths from 2018 to 2020. An additional number of service members also died in attacks by members of the Afghan security forces, which may have been infiltrated by the Taliban, the newspaper reported.

The intelligence originated with U.S. Special Operations forces in Afghanistan and was verified by the CIA, the Post said.

“Only infrequently would the president be briefed on raw, uncorroborated intelligence,” but according to the reports, that is not the case with this information “gleaned from site exploration in Afghanistan, corroborated by detainee briefings and further corroborated by broader all-source collection and analysis,” former National Security Council spokesman, Ned Price, told VOA.

Price was among those who provided then-President Barack Obama with his daily intelligence briefing. Price also noted to VOA that various senior administration officials, including Zalmay Khalilzad, the U.S. envoy for Afghanistan reconciliation, “had staked out positions on how to respond to Russia. If this truly were raw, uncorroborated reporting, there wouldn’t have been high-level policy discussions regarding a response.”

Both Russia and the Taliban deny the reports of the bounties, with the Kremlin calling them “baseless and anonymous accusations.”

A spokesman for the Taliban, Zabihullah Mujahid, rejected the report that the insurgents have “any such relations with any intelligence agency” and called the newspaper report an attempt to defame them.

“These kinds of deals with the Russian intelligence agency are baseless — our target killings and assassinations were ongoing in years before, and we did it on our own resources,” he said. “That changed after our deal with the Americans, and their lives are secure, and we don’t attack them.”

Earlier this year, the United States and Taliban signed an “agreement for bringing peace” to Afghanistan after more than 18 years of conflict. The U.S. and NATO allies have agreed to withdraw all troops by next year if the militants uphold the deal.

A former deputy assistant secretary of defense for the Middle East, Mick Mulroy, called the reports disturbing. He noted Russia is deemed an enemy of the United States in the U.S. national security strategy.

“We do not want a war with Russia and we do not want to start killing each other’s soldier, but there are some actions you can’t accept,” Mulroy, also a former CIA paramilitary officer, and currently an ABC News national security analyst, told VOA. “If we have solid evidence that this is being done and our forces are being killed, the gloves should be hitting the floor.”