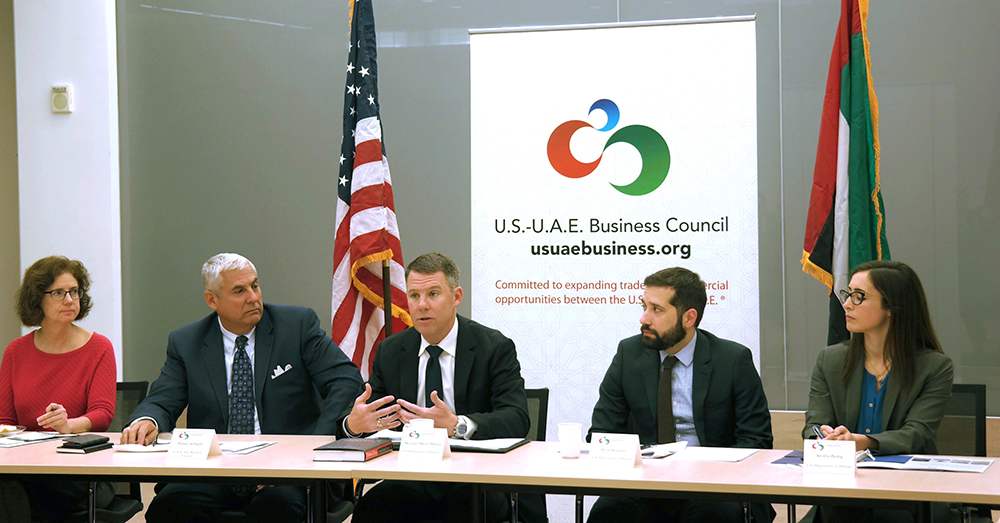 As published on U.S.-U.A.E. Business Council:

The U.S.-U.A.E. Business Council hosted recently appointed Deputy Assistant Secretary of Defense for the Middle East (DASD) Michael Mulroy for a roundtable policy breakfast on the 19th of April in Washington, D.C. The breakfast provided private-sector stakeholders in the defense industry with an opportunity to hear from Mr. Mulroy on the current contours of the U.S.-U.A.E. defense and security relationship.

Mulroy discussed the United States’ current defense strategy and its implications for the Middle East and North Africa. He also outlined the importance of the U.A.E. as a capable partner with numerous shared policy interests including combating terrorism, extremism, and cyber terrorism in the region as well as countering Iranian regional expansion.

“For the United States to implement our National Defense Strategy, we must work by, with, and through capable partners like the United Arab Emirates,” said Mr. Mulroy.

U.S.-U.A.E. Business Council President Danny Sebright facilitated a discussion on key regional issues, including the fight against ISIS in Iraq and Syria, the ongoing conflict in Yemen, increasing cybersecurity threats, and heightened tensions in the Gulf. Stakeholders were given the opportunity to engage Mr. Mulroy on U.S.-U.A.E. defense and security cooperation, and the DASD sought audience members’ perspectives on opportunities and challenges facing American businesses in the region.

Concluding the event, Mr. Sebright said, “The United Arab Emirates and the United States share a common resolve to preserve security and stability in the Middle East and around the world. By working closely with the U.S. and other international partners, the U.A.E. demonstrates its commitment to confront, degrade, and eradicate terrorism and extremism and make the world a safer place.”

On 05 April 2019, the Jackson Institute for Global Affairs at Yale University hosted its 3rd annual Special Operations Conference. This years conference was the largest and most robust yet, with over 90 participants and attendees from across the spectrum of the special operations, intelligence, diplomatic, academic, and defense industry communities. The conference focused on exploring the role SOF would play in the developing multi-polar strategic environment. This included reviewing the historic threats of violent extremist organizations, growing challenges from competitive global powers, how advancing technologies would impact SOF capabilities and operators, and what the community has learned from nearly two decades at war.

This year’s SOF Conference was especially significant due to the participation of two senior DoD policymakers: Assistant Secretary of Defense for Special Operations and Low Intensity Conflict Owen West, and the Deputy Assistant Secretary of Defense for Middle East Policy Mick Mulroy. ASD West opened this years conference with an informal talk aimed at the practitioners in attendance. He discussed how DoD prioritizes the challenges it faces, and how DoD quantified its investment and divestment of its limited SOF resources. Subsequently, DASD Mulroy led a discussion on the shape low intensity conflict is likely to take as a result of increased near peer global competition. The involvement of these two key DoD policymakers bridged the conceptual with the operational, and provided the majority practitioner crowd with key insight and intent so valuable in this dynamic strategic environment.