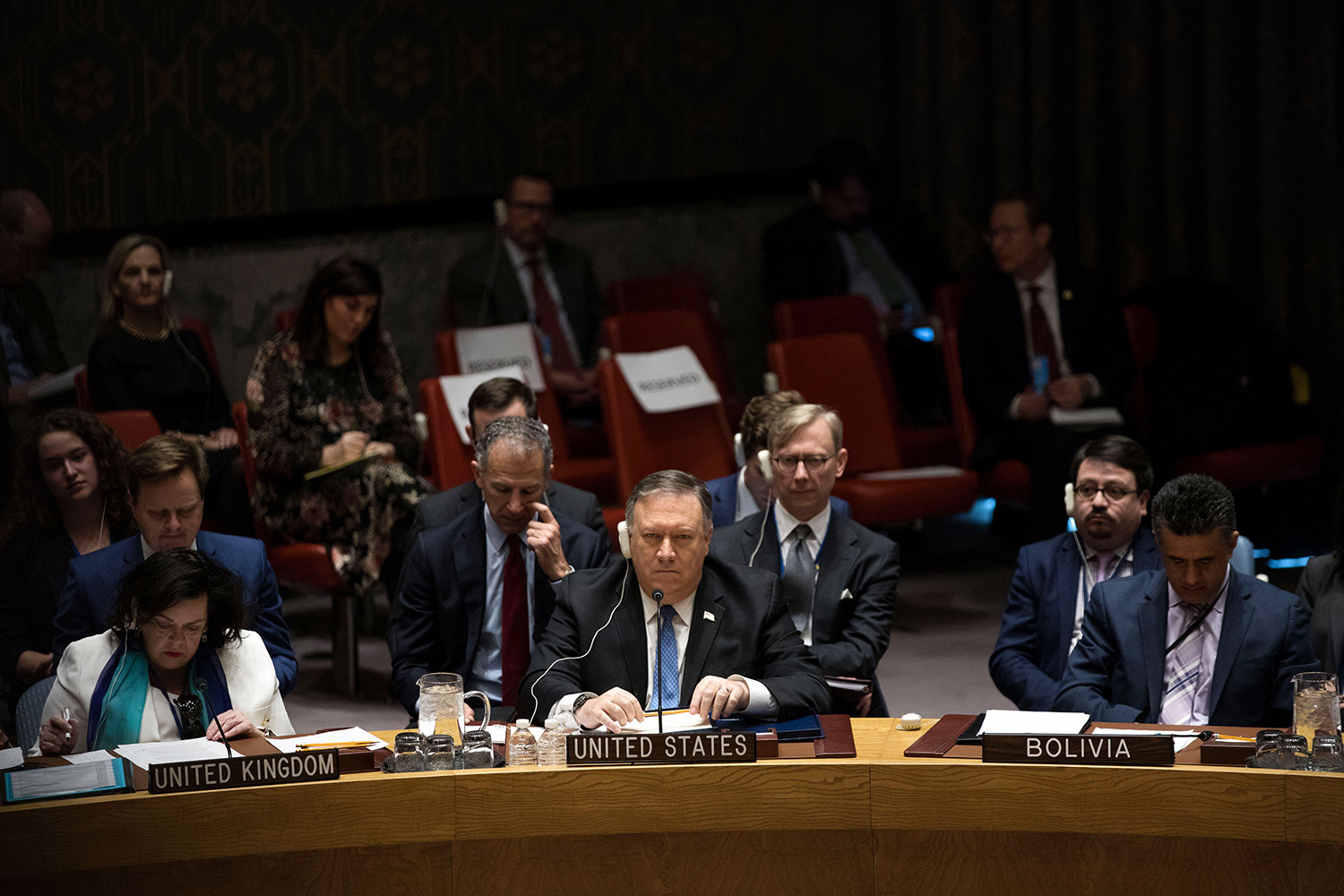 If you would like to receive Security Brief in your inbox every Thursday, please sign up here.

Trump Snaps Back to the Future on Iran

At the direction of U.S. President Donald Trump, Secretary of State Mike Pompeo is expected to travel to the United Nations in New York today to push for renewed U.N. sanctions against Iran. A U.S.-led effort to recommence an arms embargo on Tehran ended in an embarrassing defeat last week, with stiff resistance from Russia, China, and European countries.

“We have every expectation that every country in the world will live up to its obligations, including every member of the P5, and every member of the U.N. that will take seriously the international commitments to which they have signed up for,” Pompeo told reporters on Wednesday ahead of his trip.

Pompeo’s trip to the United Nations, which comes just weeks before its annual general assembly meeting, will not be a cakewalk. Russia, China, and European countries are likely to challenge the legality of the U.S. attempt to reimpose sanctions for Iran’s recent breaches of the 2015 Iran nuclear deal, which Trump exited more than two years ago.

Deal or no deal? The Trump administration insists that it can trigger the snapback sanctions as one of the deal’s original signatories based on the language in the U.N. resolution. Other participants say that Washington can’t have its cake and eat it, too: exit the deal, then use its status as a participant in the deal to trigger the sanctions.

The disagreement could lead the Trump administration to declare the Iran deal kaput, while European countries say it is not—leaving “‘Schrodinger’s Cat’-style questions about whether it’s alive or dead,” as Politico’s Nahal Toosi reports.

“By unilaterally pulling out of the JCPOA, the U.S. alienated many of our partners and allies—the same ones we need to work with to counter Iran’s malign activity and prevent them from every acquiring a nuclear weapon,” said Mick Mulroy, a former deputy assistant secretary of defense for the Middle East during the Trump administration, using the deal’s acronym.

Uncertain future. The move comes as the administration’s Iran policy is drifting away from the possibility of  a new nuclear deal, as Trump once hoped. The snapback effort will be the last hurrah for Special Envoy for Iran Brian Hook, who will soon turn over the job to Elliott Abrams. The departure has raised more doubts among experts and U.S. officials about the efficacy of the Trump administration’s so-called maximum pressure approach toward Iran.

F-35 turbulence. The Trump administration is moving ahead with plans to sell F-35 fighter jets to the United Arab Emirates over Israeli objections. Such a deal could pose a snag in the diplomatic breakthrough that took place last week between Israel and the UAE and create rare friction between Israeli Prime Minister Benjamin Netanyahu and Trump. “They’d like to buy F-35s, we’ll see what happens,” Trump said on Wednesday after Netanyahu repeatedly expressed his objections to the UAE acquiring the fighter jets.

A coup in West Africa. Malian military units carried out a coup this week after months of protests against corruption and ineffective governance. Mali is at the center of French and U.S.-led efforts to combat terrorist groups in the Sahel. The United States, European countries, and other countries in the region were swift to denounce the coup, but it didn’t stop the military from ousting the country’s president and prime minister.

But coups in Mali have backfired in the past, and played into the hands of terrorist organizations: Chaos sowed by a military coup in Mali in 2012 allowed Islamic militant groups to take control of nearly two-thirds of the country within months.

Violence and fraud in Afghanistan. Overall violence in Afghanistan has increased since the U.S.-Taliban peace deal was signed in February, according to a new report by the U.S. inspector general on the military’s involvement in the country. Despite the Taliban’s cease-fire with the United States and an 80 percent reduction in U.S. airstrikes, the Taliban escalated attacks against the Afghan National Defense and Security Forces between April and June.

Such violence, combined with the ongoing dispute over prisoner releases, has “strained the peace process” with the Afghan government, the report said. Meanwhile, the inspector general’s investigations led to the criminal debarments in April of four companies and one individual related to a fraud investigation on medical supplies intended for U.S. troops in Afghanistan.

The mistake has since been fixed.

That’s it for today.

For more from FP, subscribe here or sign up for our other newsletters. Send your tips, comments, questions, or typos to [email protected].