Trump Gets His Turkey Withdrawal Deal With Bolton, Mattis Gone

By loboinstitute_yowwy3 October 7, 2019 Print
No Comments 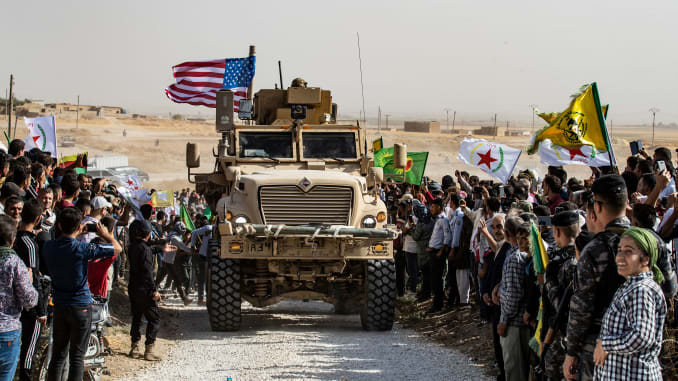 As published by Bloomberg By David Wainer and Glen Carey.

President Donald Trump has spent his presidency trying to draw down forces in “endless” wars from Afghanistan to Syria but had been stymied by his most senior advisers in almost every case. Until now.

In a Sunday night announcement, the White House said Trump and Turkish President Recep Tayyip Erdogan agreed U.S. forces would stand aside in northern Syria if Turkey sends in troops, exposing U.S.-allied Kurdish fighters — who are viewed as terrorists in Ankara — to the risk of slaughter. Trump said the U.S. had been in Syria too long, had achieved its goals and had already paid the Kurds for their cooperation in fighting Islamic State.

“The Kurds fought with us, but were paid massive amounts of money and equipment to do so,” Trump wrote on Twitter. He added later, “The endless and ridiculous wars are ENDING! We will be focused on the big picture, knowing we can always go back & BLAST!”

….down, watching over a quagmire, & spending big dollars to do so. When I took over, our Military was totally depleted. Now it is stronger than ever before. The endless and ridiculous wars are ENDING! We will be focused on the big picture, knowing we can always go back & BLAST!35.4K11:20 AM – Oct 7, 2019Twitter Ads info and privacy13.9K people are talking about this

Trump appeared to reel in some of his comments later, saying in tweets that he could “totally destroy and obliterate” Turkey’s economy if it takes “off limits” actions. He said its responsibilities include watching over “captured ISIS fighters and families” so that Islamic State terrorists aren’t set free.

The president’s move came after the biggest opponents to Trump’s troop withdrawal demands in the past had left his orbit: Secretary of Defense Jim Mattis quit last December over a similar proposal and National Security Advisor John Bolton was dismissed last month. Both had sought security guarantees for the U.S.-allied Kurdish fighters, who did much of the heavy work to fight Islamic State.

‘Leaving Them to Die’

Mattis and Bolton have been replaced in Trump’s circle, but by men wielding far less influence on foreign policy. The one remaining member of Trump’s original national security cabinet, Secretary of State Michael Pompeo, has long signaled he wouldn’t quit over a policy he disagreed with. That’s left opposition to Trump’s plan coming from voices outside the White House.

“The Kurds were instrumental in our successful fight against ISIS in Syria,” Nikki Haley, Trump’s former ambassador to the United Nations, wrote on Twitter. “Leaving them to die is a big mistake. #TurkeyIsNotOurFriend”

Similar criticism came from Republican Senator Lindsey Graham, a frequent golfing partner of the president, who said the “irresponsible” move will benefit Islamic State by giving it time to regroup, and Iran.

Brett McGurk, the special envoy to the Syria conflict who quit at the same time as Mattis last year, blasted the president’s decision, saying the president “blusters and then leaves our allies exposed when adversaries call his bluff or he confronts a hard phone call.”

It wasn’t immediately clear how much Trump consulted with Defense Secretary Mark Esper or Pompeo before the decision was made.

Officials at the Pentagon didn’t immediately respond to a questions about Esper’s involvement. But the Pentagon issued a statement that said “unilateral actions creates risks for Turkey.”

“The Department of Defense made clear to Turkey — as did the president –that we do not endorse a Turkish operation in Northern Syria,” Lieutenant Colonel Michael Andrews, acting director of public affairs, said in a statement. “We will work with our other NATO allies and Coalition partners to reiterate to Turkey the possible destabilizing consequences of potential actions to Turkey, the region, and beyond.”

The announcement of Trump’s call with Erdogan came just as Pompeo was returning from a weeklong trip to southern Europe. But State Department officials minimized the impact of Trump’s statement, saying only about two dozen U.S. troops are being moved. They also said they hope Erdogan won’t attacks the Kurds.

Based on comments by some senior U.S. officials in recent days, the president’s decision was abrupt.

“The U.S. military presence in northeast Syria and our partnership with local security forces there are major contributors to stability in that area,” Mick Mulroy, deputy assistant secretary of defense for the Middle East, said Oct. 2 at the Council on Foreign Relations in Washington.

Turkey-Syria Border: Air and ground patrols demonstrate our continued commitment to address Turkey’s legitimate security concerns, while also allowing the @CJTFOIR and our SDF partners to focus on crushing ISIS remnants. #DefeatDaesh https://twitter.com/US_EUCOM/status/1180429514561769472 …U.S European Command✔@US_EUCOMU.S. and Turkish militaries are executing concrete steps as part of the security mechanism framework to address Turkey’s legitimate security concerns. The Department of Defense will be transparent as each phase of the security mechanism is implemented. #WorkingTogether #Allies1667:19 AM – Oct 5, 2019Twitter Ads info and privacy230 people are talking about this

It was the second time Trump has announced a plan to get U.S. forces out of Syria.

In December, Trump said he’d reached a deal with Erdogan to get out of the war-ravaged country, saying the goal of defeating the Islamic State’s “caliphate” was accomplished. That prompted the resignation of Mattis, a retired four-star general, and McGurk, a long-time specialist on Syrian issues. The pushback from those aides as well as key allies like Graham essentially stopped the withdrawal effort before it started.

But this weekend’s call with Erdogan apparently persuaded the president to move, marking his biggest foreign policy decision since last month, when he interceded to call off peace talks with the Taliban intended to allow U.S. forces to begin withdrawing from Afghanistan after 18 years. Since coming to office, Trump has increased troop levels in Afghanistan even though he has a long history of urging the U.S. get out of the country.

Trump called off an effort to broker a deal with Taliban leaders at Camp David, Maryland, last month at the last minute. Bolton, who was still national security adviser, opposed the deal. He was dismissed from the White House the following week.

— With assistance by Anthony Capaccio, and Nick Wadhams(Updates with new Trump comments in fourth paragraph and Pentagon and State Department comments from ninth paragraph)