By loboinstitute_yowwy3 September 25, 2019 Print
No Comments 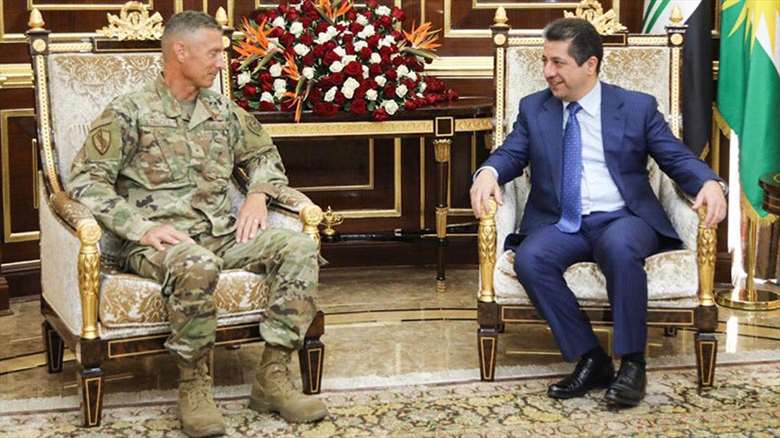 As published by Kurdistan 24 by Hiwa Shilani

One meeting, with Brig. Gen. Gregory Kreuder, Chief of the Office of Security Cooperation-Iraq (OSC-I), was held with the US military directly, as the OSC-I is a US entity, based at the US embassy in Baghdad.

Minister of Peshmerga, Shorish Ismael, and US Consul-General Steven Fagin, attended the meeting between Barzani and Kreuder.

In that meeting, the Kurdish Prime Minister discussed the most recent security developments in Iraq and the region, including “the extensive military coordination between the US and Kurdistan Region,” a read-out from his office explained.

Barzani thanked the US and the global Coalition for their aid “in the fight against the so-called Islamic State and emphasized the necessity of ongoing support.”

Indeed, the Pentagon’s Deputy Assistant Secretary of Defense for the Middle East, Michael Mulroy, recently told Kurdistan 24 that the US “will continue to sustain our robust train, equip, advise, and assist program with the Peshmerga in order to ensure the enduring defeat of ISIS.”

READ MORE: Pentagon: US will continue to support Peshmerga

Both Barzani and Kreuder “recognized that improved relations between the [KRG] and federal government of Iraq have facilitated constructive dialogue and a path to a stable relationship that recognizes the rights of the Kurdistan Region under the constitution.”

The two officials agreed that the KRG and federal government have a “shared interest” in strengthening ties and improving coordination between the Peshmerga and Iraqi Security Forces (ISF), and they “recognized that mutual respect and coordination between Erbil and Baghdad will help stabilize the country and preserve the security of its people.”

In his meeting with the Coalition commander, Maj. Gen. Hill, Barzani “discussed the ongoing threat” still posed by the Islamic State and “the challenge it presents to displaced families wishing to return home.”

The Kurdish leader also “provided an update on the coordinated efforts of the Kurdish Peshmerga and [ISF] to eliminate the so-called Islamic State and protect the people of Iraq,” according to a summary of the discussion provided by Barzani’s office.

Barzani also explained that Erbil had received positive signals from Baghdad on solving disputes between the two on a constitutional basis.

Hill praised the “robust partnership” between the Peshmerga and ISF and “affirmed the Coalition’s support for cooperation between the [KRG] and the federal government of Iraq.”

Barzani informed Hill of the KRG’s “commitment to establishing a constructive and stable relationship with Baghdad, underpinned by the Kurdistan Region’s rights under the constitution.”