Pentagon says no plan to withdraw American troops from Iraq, as US and NATO suspend operations against ISIS

By loboinstitute_yowwy3 January 6, 2020 Print
No Comments 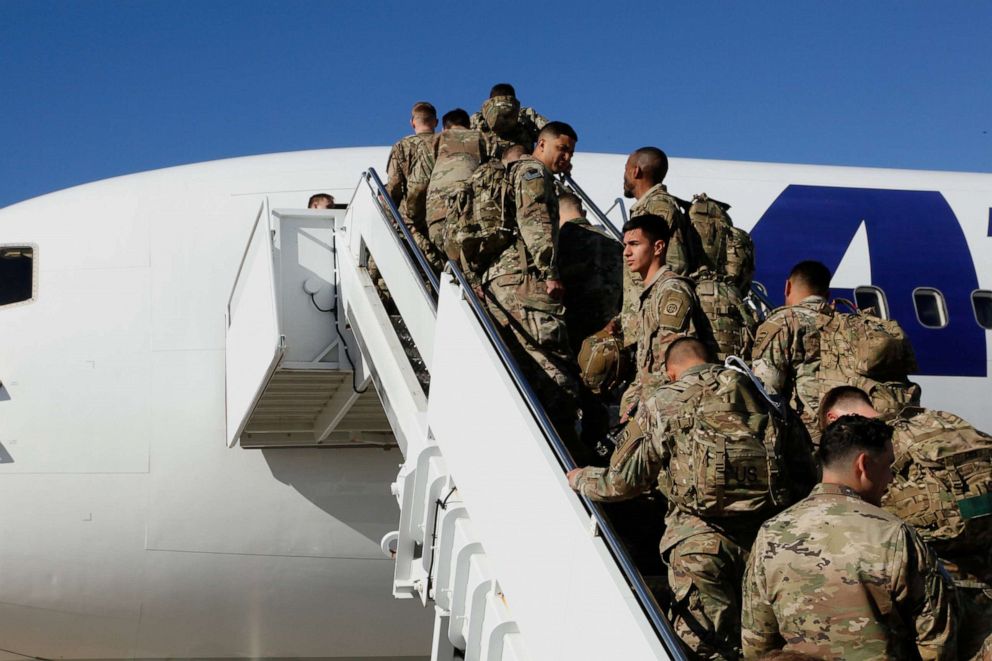 As published by ABC News by Elizabeth McLaughlin

The Pentagon has no plans to withdraw U.S. troops from Iraq, senior defense officials said on Monday, despite a vote by the Iraqi Parliament over the weekend to kick foreign forces out of the country and a decision by the U.S. and NATO to suspend operations against the Islamic State there.

The non-binding vote followed the U.S. drone strike that killed Iranian general Qassem Soleimani and sparked outrage in Tehran as hundreds of thousands of mourners took to the streets with the Iranian government vowing to take revenge against the United States.MORE: Pentagon to deploy roughly 3,500 more troops to Middle East with others placed on alert status, amid tensions with Iran

“There has been no decision whatsoever to leave Iraq,” Defense Secretary Mark Esper told reporters on Monday, emphasizing that the parliamentary resolution was “non-binding.”

But confusion was sparked earlier in the day by a letter circulating on social media from an American general to the Iraqi defense ministry that indicated U.S. and coalition troops would reposition “over the course of the coming days and weeks.”

The letter concluded by saying, “We respect your sovereign decision to order our departure.”

Chairman of the Joint Chiefs of Staff Gen. Mark Milley called the letter a “draft,” and said it was never meant to be made public. He said it was written to notify Iraqi officials of the movement of additional U.S. troops largely from Kuwait into Iraq. The Pentagon has deployed approximately 3,500 soldiers from the 82nd Airborne Division to Kuwait as a defensive measure should Iran or its proxy forces retaliate against American personnel and interests.

“It was a mistake, an honest mistake, a draft unsigned letter because we are moving forces around, and we have increased helicopter movement in Iraq between Baghdad and Taji and other camps and stations, and we’re bringing in people from Kuwait and all this other types of stuff,” Milley said. “So we’re moving forces all over the place.”MORE: Soleimani approved attack on Iraqi military base that killed American: Top US general

Earlier on Monday, U.S. Ambassador to Iraq Matthew Tueller met with Iraqi Prime Minister Adel Abdul-Mahdi, according to his office, about the need “to implement the withdrawal of foreign forces” in accordance with parliament’s decision. The prime minister has condemned the strike and called for parliament to take “urgent measures” to get foreign militaries out of the country.

Soleimani was the leader of Iran’s Quds Force, which the U.S. considers a terrorist organization responsible for the deaths of hundreds of American troops in Iraq over decades. Milley defended the decision to kill the Iranian general on Monday, saying there was “compelling” intelligence that he posed an “imminent” threat to Americans in the Middle East.

“Did (the intelligence) exactly say who, what, when, where? No. But (Soleimani) was planning, coordinating and synchronizing significant combat operations against U.S. military forces in the region, and it was imminent,” Milley said.

But as tensions mount between Washington and Tehran in the aftermath of the strike, the U.S. and NATO have been forced to suspend the fight against ISIS in Iraq.

After NATO announced that it was suspending its training mission, the U.S.-led coalition said in a statement on Sunday that it would also “pause” its ongoing operations against ISIS in Iraq due to the need for personnel to be “fully committed to protecting the Iraqi bases” that have been targeted by Iranian-backed militia forces — attacks which continued over the weekend.

NATO Secretary General Jens Stoltenberg said on Monday that while NATO allies expressed their “strong support” for the fight against ISIS in Iraq “the safety of our personnel is paramount.” Forces from NATO countries are co-located with U.S. service members on bases inside Iraq, which are now at a heightened state of alert given escalating tensions.

“As such, we have temporarily suspended our training on the ground,” Stoltenberg said.

“At our meeting today, Allies expressed their strong support for the fight against ISIS and for the #NATO mission in #Iraq. In everything that we do, the safety of our personnel is paramount. As such, we have temporarily suspended our training on the ground,” – @jensstoltenberg

Approximately 5,000 American troops are in Iraq as part of a training mission to assist Iraqi Security Forces in the fight against ISIS, a group that took over large swaths of the country in 2014.

“The U.S. and Iraqi military defeated ISIS together,” said Mick Mulroy, an ABC News contributor and former deputy defense secretary for Middle East policy, adding, “Together, they built an Iraqi Security Force that the Iraqi citizen should be proud of and confident in.”

A Pentagon report issued last August warned that ISIS was consolidating its insurgency in Iraq and that Iraqi forces lacked the ability to maintain security in territories already cleared of the terror group north and west of Baghdad.