By loboinstitute_yowwy3 April 4, 2020 Print
No Comments 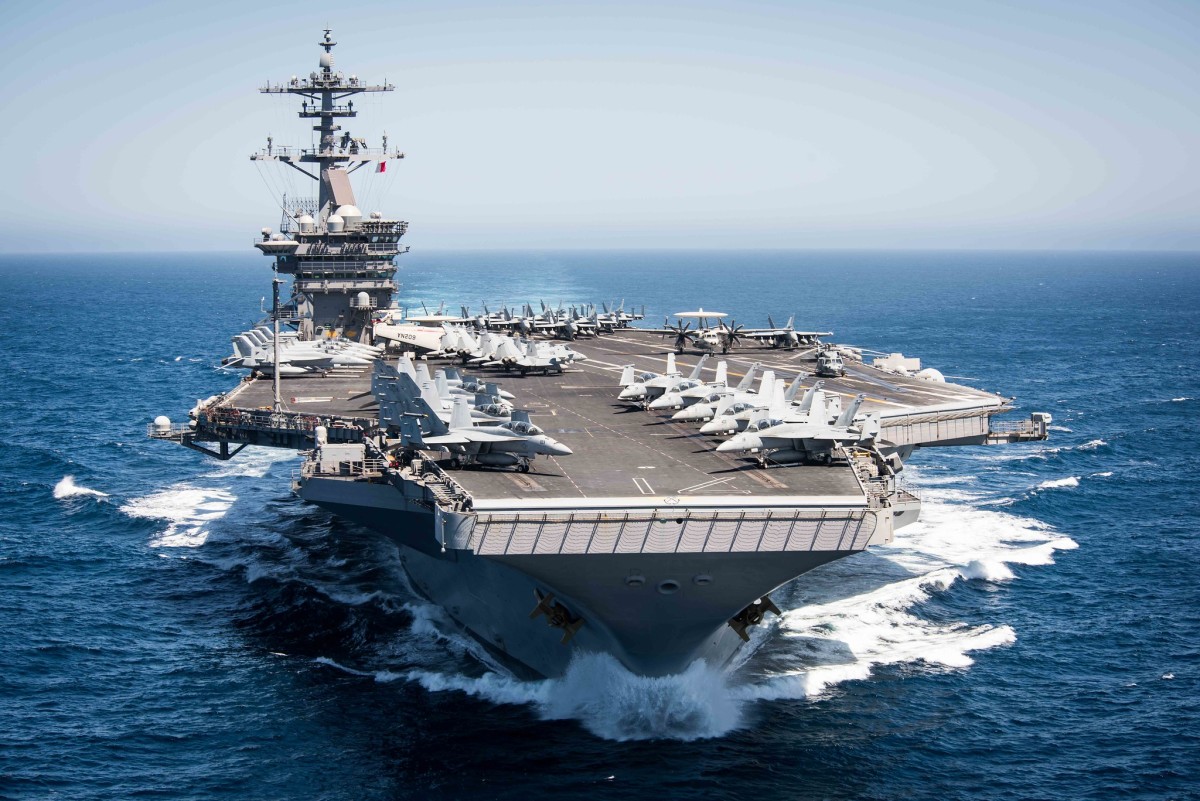 The Defense Department is removing an aircraft carrier from the Middle East, a U.S. official confirmed to Foreign Policy, in a move that could trigger a fight for assets within the Pentagon with the coronavirus outbreak sidelining the infected carrier USS Theodore Roosevelt in the Pacific.

Although it was not immediately where the carrier, the USS Harry Truman, would redeploy, one former U.S. defense official said the U.S. Pacific Fleet is likely to ask for the ship, which previously had been expected to stay in the Persian Gulf on a deterrence mission against Iran. Trending Articles

Our author braves closing borders and airport chaos to catch one of the few planes still flying.

The ship will now leave on its scheduled rotation, contrary to an earlier plan to leave the nuclear-powered carrier in the region that had been announced by Gen. Kenneth McKenzie, the top U.S. military officer in the Middle East, on March 13. Politico first reported the news of the move.

Gen. Mark Milley, the U.S. military’s top officer, would have the final say on any decision to pivot assets to compensate for the Roosevelt, which will offload more than half of its 4,800 crew in Guam after the ship’s commanding officer pleaded for no more than 10 percent of sailors to stay on board. A Joint Chiefs of Staff spokesperson said they could not comment on future operations or locations for aircraft carriers. “The Pacific Fleet remains ready to meet all operational commitments,” said Lt. j.g. Rachel McMarr, a spokesperson for the command.

While top officials insisted Wednesday that the remaining crew aboard the ship would be able to respond to a crisis, the Navy’s decision to offload most of the USS Roosevelt has created a strain on the carrier fleet, as the USS Ronald Reagan is also docked and undergoing maintenance. The coronavirus has spread to at least 93 sailors aboard the Roosevelt, senior Navy officials said Wednesday. The Pentagon has not confirmed the initial source of the outbreak, though the ship made a port visit to Vietnam in early March as the novel coronavirus spread across Asia.

The USS Truman began moving just hours before the Navy handed down disciplinary action over the leaked letter about the dire situation aboard the USS Roosevelt. In a snap press conference on Thursday, Acting Navy Secretary Thomas Modly announced that he had fired the commander of the USS Roosevelt, Capt. Brett Crozier, after the service’s brass insisted earlier in the week they would not “shoot the messenger” whose plea to allow most of his 4,800 crew off the aircraft carrier leaked in the San Francisco Chronicle on Tuesday.

Modly’s official justification for firing Crozier was a loss of confidence for the letter leaking publicly, though his argument for the termination centered on the number of people the officer copied in his e-mailed plea for help. “It was copied to 20 or 30 other people,” Modly said, adding that Crozier’s claims that as many as 50 of his crew could die “raised alarm bells unnecessarily.” The Navy expects the number of cases on the coronavirus-striken carrier to end up in the hundreds.

Former officials said there is likely to be a tit-for-tat among the military’s combatant commands over resources as the Joint Staff weighs the operational challenges in the Asia-Pacific region that have worsened over the coronavirus spread. “The Teddy Roosevelt isn’t going to be the only American tip of the spear that’s going to be impacted,” said Kori Schake, the director of foreign and defense policy studies at the American Enterprise Institute, a Washington think tank.

The previously announced extended deployment of the USS Truman had marked the first time in recent years that the Navy had kept two carriers in the Middle East.

“Now that we have the USS Theodore Roosevelt effectively out of operation, the new chairman [Gen. Milley] and his staff will have to look at shifting another aircraft carrier from other combatant commands to make up for that deficiency,” said Mick Mulroy, the Pentagon’s top Middle East official until November 2019. “They may look to Centcom for this national asset, but they will have to consider the recent concerns of Iran taking action against US assets and interests,” said Mulroy, who now heads the Lobo Institute, a consultancy focused on conflict resolution.

The former U.S. defense official who spoke to Foreign Policy said a carrier or additional assets to the Pacific would help reinforce the Trump administration’s Asia-focused strategy and offset a potential Chinese surge at a time when the Pentagon has beefed up its presence in the Middle East and South America.

China’s Military Claims to Be Virus-Free

Officially, not a single PLA soldier has been infected. ARGUMENT  | JOEL WUTHNOW

Even amid Defense Secretary Mark Esper’s review of the military’s geographic combatant commands that seeks to move troops and weapons to Asia, McKenzie, the Central Command chief, said in March that the Pentagon chief had signed off on a decision to allow two carriers to stay in the region.

McKenzie insisted that the move to keep two carriers—which follows Centcom’s yearlong husbanding of U.S. troops and weapons into the Middle East to deal with the threat posed by Iran, including Patriot missile defense batteries—would give him more flexibility to deal with Tehran’s irregular attacks.

“The beauty of the aircraft carrier is this: It has enormous offensive capability. It has enormous defensive capability, it has mobility. We can move it around,” McKenzie told reporters in the Pentagon briefing room last month after the United States retaliated against the Iran-backed Kataib Hezbollah militia for a deadly rocket attack at Iraq’s Camp Taji. “It’s a floating piece of American sovereignty.”

The possibility of a carrier shift to Asia in the wake of the coronavirus outbreak on the Roosevelt did not come up at Centcom, a U.S. official told Foreign Policy. But after the Roosevelt docked, “the writing was on the wall” that the Truman’s extended deployment to the Middle East might not last.

Indeed, the decision generated concern in defense circles and on Capitol Hill that the carriers might be vulnerable to Iranian attack in the narrow waterway and that the Trump administration has been further distracted away from the potential threat posed by China, the former defense official who spoke to Foreign Policy added. Adm. Phil Davidson, the U.S. military’s top officer in Asia, has consistently trumpeted that his area is the Pentagon’s priority in public speeches.

The spread of the coronavirus across the U.S. military, which has seen the number of cases triple in the past week according to Pentagon figures, is likely to compound the deadline pressure on the Trump administration’s plan to shift focus toward a possible fight with China as President Donald Trump faces reelection in November.

“I think it is too early to tell what the impact of the virus would be on the implementation of the [National Defense Strategy], except to say that it will not happen on the timelines that previously existed,” Bryan McGrath, a managing director at the FerryBridge Group, told Foreign Policy in an email. “I expect there to be considerable pressure on the DoD budget as either the pandemic continues or in its aftermath as we look to rebuild.”

The Pentagon could also seek to alleviate the strain on U.S. forces in the Pacific by bringing in smaller vessels, former military officials said, as the U.S. Navy has turned toward smaller and unmanned surface vessels to fulfill its legally mandated 355-ship goal.

“We have plenty of capacity,” said retired Vice Adm. John Miller, the U.S. Navy’s former top commander in the Middle East. “I don’t want to diminish the impact of having an aircraft carrier come offline. There are other types of ships, there are other forces that you can use to fill in by the loss of the carrier.”

There still could be other opportunities to pivot U.S. troops to Asia before the end of the year other than a carrier, even as the Pentagon has frozen most travel and slowed the pace of deployments, according to a statement released in late March. The United States has begun to thin out its presence at outlying bases in Iraq, eliminating three bases, as the Pentagon lacks sufficient missile defense coverage to protect troops from hit-and-run attacks by Iranian proxies.

April 2: This story was updated with news of the firing of the commander of the USS Roosevelt.