It Is Not the Children’s War 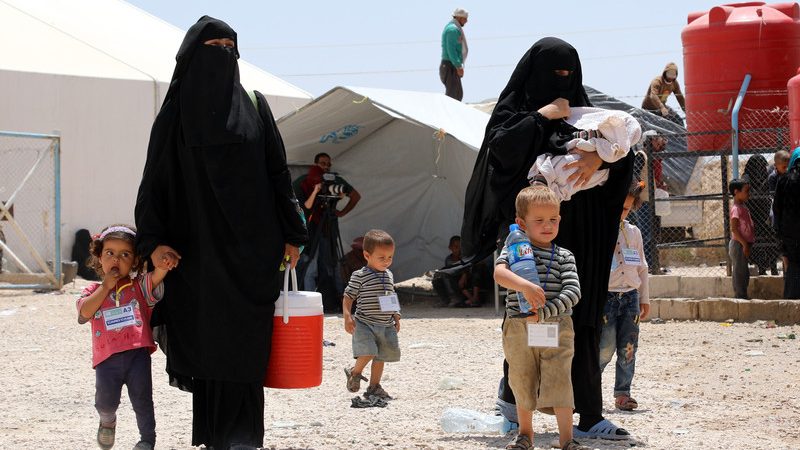 We must confront the al-Hol detention camp now.

It was a typical winter morning in Amman, Jordan, where I was living in an urban poor area that until recently had been comprised almost entirely of Palestinian refugees but was now flooded with Syrians who had managed to escape the horrors of the raging Syrian war. The temperature inside my cinder block housing was below 40 degrees Fahrenheit, which was not much warmer than outside. As I awoke and pulled the blankets away from my head, I stared upwards at the ceiling and watched my exhaled breath dance through the cold crisp air in the same rhythmic manner it did every winter morning.

And, as had also become ritual, my first thoughts of the day as my body began to come alive would be about death. As morbid as that may sound, it had become the reality in which I lived. I would spend my earliest moments wondering about the fate of friends and former colleagues who had remained in Syria. I was fairly certain that some of them had taken active roles in the conflict, but other than that, I could do nothing more than imagine their fates.

That particular morning, however, my thoughts strayed further. As I lay there, relatively safe from the brutal war raging a few hundred miles north in Syria, I thought to myself, “If I had been raised here, there is no way in hell I wouldn’t have joined the resistance in one way or another.” And at that moment, I realized how deeply the previous decade of living and working throughout the Middle East had influenced me. I had arrived at a new and altogether different place of understanding about life in this tumultuous region.

I no longer wondered why masses of Arabs from every different background would be willing to go out to the streets to protest against brutal dictatorial regimes with the full awareness that doing so would mean imprisonment, torture, or even death. I understood.

I no longer wondered why elderly men and women in their 80’s and 90’s would be willing to hand over their life savings to an opportunistic smuggler to purchase a “seat” on a dilapidated boat they are entirely aware has little-to-no chance of surviving the sea voyage in attempting the journey across the Mediterranean to Europe. I understood.

I no longer wondered how young Arab guys with their entire lives ahead of them could be so easily manipulated and turned into jihadists and suicide bombers. I understood.

And I no longer wondered whether or not I would have become a fighter; at that moment in time, I was entirely self-aware as to who and what that environment would have transformed me into. I fully grasped both viscerally and cognitively how the relentless poverty, brutal dictatorial regimes, widespread government corruption, and extreme social injustice and inequality found throughout much of the Arab world produce all kinds of fighters, extremists, and activists — some good and some bad, but none of whom I could unequivocally say I would never have become.

On that cold winter morning in an urban slum in the Middle East, the dark, evil combination of unrelenting poverty, horrific war, severe intolerance, and extreme despotism had become a reality I understood enough to see myself in any one of their shoes.

This is also why the absolute disaster of a mess that is the al-Hol refugee camp in Northeast Syria must be confronted head-on and fixed now.

There are roughly 55,000 people living in absolute filth and squalor in the al-Hol detention camp, 93 percent of whom are the wives and children of adult male ISIS fighters that were captured or killed during the war against the Islamic State. Of these 55,000 residents, about half are under 12 years old, and if not rehabilitated from the evil ISIS ideology they were indoctrinated into and reintegrated back into society, the likelihood is unquestionably high that they will one day turn into very real and very dangerous international instruments of death. Each and every one of these children will grow up into an adult, and without rehabilitation and reintegration, will seek revenge for the deaths of their fathers. Let us remember that it only took al-Qaeda 19 men to hijack four airplanes and carry out the 9/11 terrorist attacks in America, killing nearly 3,000 innocent people; think what 30,000 vengeful jihadists could accomplish.

Although the clock is ticking, and time is running out, there remains a small window of opportunity for us to facilitate a process of healing for these children who, at no fault of their own, were forced to become children and soldiers of the Islamic State.

The solution is multi-faceted and includes repatriation, rehabilitation, and reintegration.

The first step, which is already happening to a certain extent, is to repatriate those held in al-Hol to their countries of origin. To do this, there must be a solid and effective screening process in place to separate those who can successfully be rehabilitated from those who cannot or will not renounce their allegiance to ISIS and violent jihadist ideology. This screening process should primarily be focused on the adult female detainees, not the younger children, and be led by skilled interviewers with a deep understanding and knowledge of religious extremism. This process, if done correctly, will identify the women who remain a danger and therefore must be sent to jails and prisons where they will be held until they are no longer a threat and can be reintegrated back into society — if that is possible.

Secondly, we must rehabilitate the mothers, wives, and children of the Islamic State. This must include both psychological and emotional counseling and support led by skilled psychologists and experts in trauma therapy and a deradicalization process facilitated by Islamic clerics and scholars teaching non-violent and alternative forms of Islam.

And thirdly, we must reintegrate the detainees back into society where they can become contributing members. For this to be effective, the international humanitarian and NGO community must be given the resources they need to mount an all-out war against poverty, for the overwhelming majority of Islamic jihadists are recruited from the slums and refugee camps of the developing world. The international community must make poverty alleviation and economic development initiatives a top priority with regard to counterterrorism strategies and countering violent extremism. Giving young people real, tangible hope for a better future will undoubtedly help steer many clear from venturing down the path towards violent Islamic extremism in the first place.

While this admittedly does not address the inconvenient truth that the U.S. Government continues to support the use of children as soldiers around the world by issuing “national interest waivers” to nations such as Libya, Somalia, the Democratic Republic of the Congo, Yemen, and others, it is a start. But until our government leaders have the resolve and courage to say enough is enough and, without compromise, punish each and every single country that uses or supports the use of children as soldiers, we will continue to see places like al-Hol around the world.

J.D. Pitts is Founder & Principal Advisor for Ahlan International, a firm specializing in equipping clients to successfully operate in Arab and Islamic contexts worldwide. Prior to founding Ahlan International, Mr. Pitts lived for 15 years in Egypt, Syria, Jordan, Sudan, Yemen, and Mauritania. While there, his professional experience included both the education and business sectors, as well as over a decade of deep involvement in humanitarian work ranging from small, grassroots operations to large-scale, UN-managed operations.