FP subscribers can now receive alerts when new stories written by these authors are published. Subscribe now | Sign in

Welcome back to Foreign Policy’s SitRep! Jack and Robbie here, invading your inbox with another round of weekly natsec news. WNBA star Brittney Griner was sentenced to nine years in Russian prison for drug possession today, despite the Biden administration’s efforts to exchange the basketball phenom. We’ll be tracking this closely in the coming days.

Alright, here’s what’s on tap for the day: U.S.-led Iran nuclear deal negotiations extend into overtime, Congress moves to counter Russia and China in the Balkans, and Biden prepares to slap Myanmar with new sanctions.

If you would like to receive Situation Report in your inbox every Thursday, please sign up here.

Deal or No Deal

Does anyone have a tougher job in the Biden administration than Robert Malley?

As U.S. President Joe Biden’s top Iran envoy, Malley plays the unenviable role of a diplomatic Sisyphus, trying to push a renewed Iran nuclear deal up a steep hill, only to see it all come crashing down again with each new round of talks that ends in impasse. Iran has pushed for U.S. sanctions to be completely removed, including the Trump administration-era terrorist designation against the Islamic Revolutionary Guard Corps, something that the Biden administration has not been willing to commit to.

Nevertheless, Malley is heading to Vienna for another round of talks with Iran to revive the 2015 nuclear deal even as officials in Washington and Brussels voice skepticism it will lead anywhere. Most of Malley’s original team has already left his shop, and the envoy himself said that American expectations “are in check,” with Iran already deploying new centrifuges that some officials believe could bring Tehran within a month of a nuclear breakout. An Israeli official told reporters last month that the Iranians would likely make more efforts to develop their nuclear program.

But even with the negotiations looking like a serious uphill slog at this point, some experts and former officials believe that the juice is worth the squeeze, especially if it moves the region off the track of a possible nuclear arms race.

“I think the U.S. should exercise every effort to negotiate with Iran to get their regime to turn away from a path to acquiring nuclear weapons and away from their malign activities in the region including their proxy warfare to attack other countries,” said Mick Mulroy, a former deputy assistant secretary of defense during the Trump administration.

“The alternative could mean a nuclear-armed Iran which could destabilize the region, lead to yet another armed conflict in the Middle East, and start an arms race, a nuclear one.”

What should be high on your radar, if it isn’t already.

SitRep Exclusive: Congress moves on Russia, China in Balkans. A bipartisan group of senators are introducing new legislation aimed at positioning Washington to better compete with Moscow and Beijing in the Western Balkans, according to an advance copy of the bill seen by the SitRep team.

Among other things, the bill would create new anti-corruption initiatives for the region, expand U.S. sanctions authorities to target corrupt actors, and build up a new regional trade and economic competitiveness initiative. The Western Balkans Democracy and Prosperity Act is being sponsored by Democratic Sens. Jeanne Shaheen, Dick Durbin, Chris Van Hollen, and Ben Cardin, and Republican Sens. Roger Wicker and Thom Tillis.

It comes amid mounting concerns in Washington of increased Chinese investment and geopolitical clout in the Western Balkans, particularly in Serbia, and fears that Moscow could try to fuel a crisis in the region to siphon Western attention and resources away from Ukraine.

Welcome to the club. The Senate voted overwhelmingly (95-1-1) to admit Finland and Sweden into NATO, setting the stage for a historic expansion of the alliance against the backdrop of Russia’s invasion of Ukraine. Republican Sen. Rand Paul voted “present,” and Republican Sen. Josh Hawley voted against. Curiously, though, Hawley voted in favor of adding North Macedonia to NATO back in 2019. Huh. So far, 23 of the 30 NATO members have voted to admit Finland and Sweden, meaning there are only seven votes left (including, notably, Turkey) before the two Scandinavian countries can formally tie the knot with NATO.

Scoop: New Myanmar sanctions. After Myanmar’s ruling military junta carried out grisly executions of four pro-democracy activists, the Biden administration is eyeing plans to target the country’s oil and gas sector with major new sanctions, officials told Robbie and our colleague Mary Yang this week. Myanmar’s oil and gas sector is a crucial source of revenue and foreign currency reserves for the junta, and it has so far been effectively untouched by U.S. sanctions.

Biden plans to promote Robert Shriver from his post as associate director for employee services at the U.S. Office of Personnel Management to the agency’s deputy director, pending Senate confirmation.

Biden has also announced a bouquet of new diplomatic nominees: Veteran international trade litigator Richard Weiner is Biden’s pick to head up the European Bank for Reconstruction and Development; Boston-area venture capitalist Bijan Sabet is the administration’s pick to be the new ambassador to the Czech Republic; and foreign service officers Eric Kneedler and Elizabeth Rood have been chosen as Biden’s envoys to Rwanda and Turkmenistan, respectively.

U.S. Defense Secretary Lloyd Austin has tapped Air Force Brig. Gen. Patrick Ryder as his new full-time spokesman, replacing John Kirby, who departed the Pentagon for a job at the White House earlier this year. Ryder, who is currently the top spokesman for the U.S. Air Force, will remain in uniform for the role. 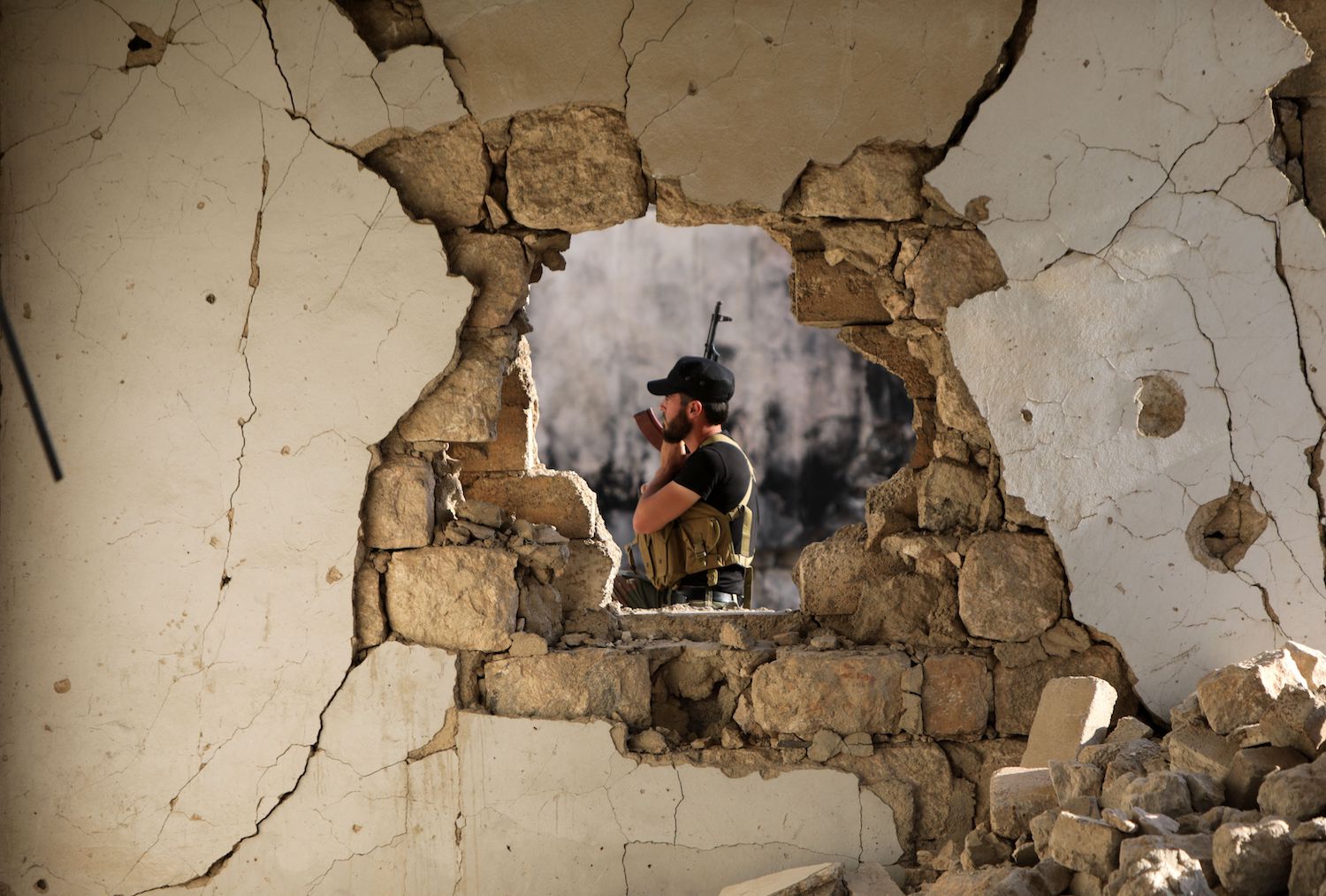 A man is seen with a gun through a hole in a building.

Put On Your Radar

Tuesday, Aug. 9: Kenya is set to hold a presidential election.

Quote of the Week

“Your beliefs do not make something true. That is what we are doing here.”

Unhappy holidays. Russian tourists vacationing in Finland might not feel so welcome this summer. A Finnish political party paid to put up billboards sticking it to the vacationers over Russia’s full-scale invasion of Ukraine: “While you are enjoying your holiday, many Ukrainians are left without a home to return to,” the ad reads.

Commenting on this and other recent articles is just one benefit of a Foreign Policy subscription.

NEW EMAIL ALERTS FP subscribers can now receive alerts when new stories on these topics and regions are published. Subscribe now | Sign in

In Sri Lanka, the Military Still Runs the Show

Actually, the Russian Economy Is Imploding

The Taliban Detained Me for Doing My Job. I Can Never Go Back.

Russian Sanctions Are Working but Slowly

In Sri Lanka, the Military Still Runs the Show

Welcome to a world of insight.

Explore the benefits of your FP subscription.

Stay updated on the topics you care about with email alerts. Sign up below.

Choose a few newsletters that interest you.

Want the inside scoop on Russian arms sales to Africa? Care to learn more about how Ukraine is arming itself and how Beijing views Washington’s support for Taiwan? FP subscribers are alrea…SHOW MORE

FP Live: The Future of Afghanistan

Last summer, the United States decided to end its longest war. But just days after the U.S. military withdrew from Afghanistan, Kabul fell—and the Taliban took control of the country. Aug.…SHOW MORE

In less than two years, Maria Ressa has received 10 arrest warrants from the government of former President Rodrigo Duterte in the Philippines, and her media company, Rappler, has been order…SHOW MORE

Beijing is running out of recipes for its looming jobs crisis—and reviving Mao-era policies.

Actually, the Russian Economy Is Imploding

Nine myths about the effects of sanctions and business retreats, debunked.

Blinken to travel to the continent after Lavrov’s “charm offensive” tour.

AUGUST 9, 2022 | 1:00 PM ET. Want the inside scoop on Russian arms sales to Africa? Care to learn more about how Ukraine is arming itself and how Beijing views Washington’s support for Taiwan? Join FP reporters in conversation with editor in chief Ravi Agrawal for a behind-the-scenes look at the biggest stories in global affairs.
REGISTER
CLOSE