Despite warnings, Trump unlikely to oppose Syrian-Russian offensive in Idlib

By loboinstitute_yowwy3 June 21, 2019 Print
No Comments 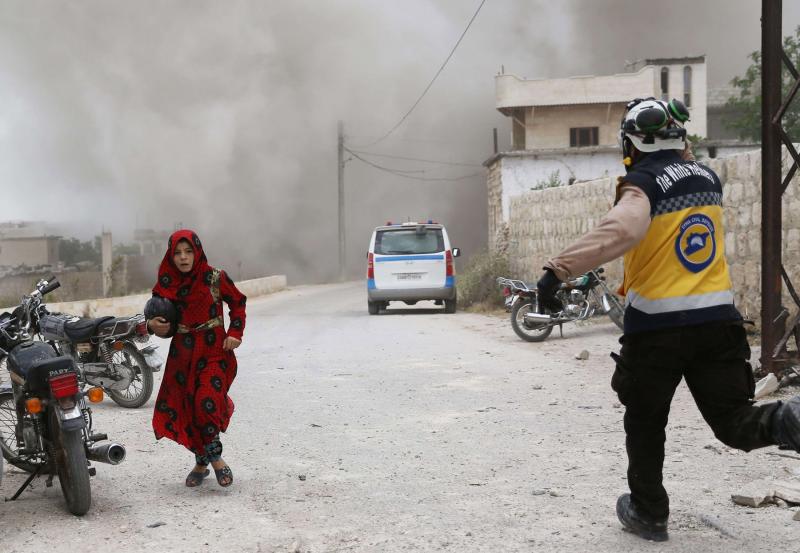 As published in The Arab Weekly:

In a surprise move given his cosiness with the Kremlin leader, US President Donald Trump tweeted that Russia and Syria are “bombing the hell out of Idlib province in Syria and indiscriminately killing many innocent civilians.”

Trump then asked rhetorically of those countries: “What will it get you? STOP.”

Trump later said “bad things are happening” in Idlib. He may have been reacting to reports about the bombing of hospitals in Idlib and the flow of refugees out of the province after attacks on civilians.

Although Trump is not known to be interested in the domestic situation of other countries, he is said to be moved by visuals. Pictures or videos of suffering children have made a particular impression on him, as when he saw footage of young victims of a chemical weapons attack in Syria in 2017, for which he ordered missile strikes on a Syrian air base.

Nonetheless, there is every reason to believe Trump will not respond militarily to an offensive in Idlib unless the Syrian regime uses chemical weapons there. That seems to be a red line for Trump and he reacted briefly but militarily in 2017 and 2018 when such weapons were used.

He likes to be seen as the “anti-Obama” and has highlighted the fact that former US President Barack Obama did not enforce his own red line in 2012 when chemical weapons were used in Syria.

Trump’s reasons for staying away militarily from the Idlib crisis are many and both Russian President Vladimir Putin and Syrian President Bashar Assad seem to understand his reticence.

Trump campaigned in 2016 against the United States getting involved in the Syrian civil war and accused his opponent, Hillary Clinton, of being “trigger happy” by advocating a safe-haven zone in part of Syria that would be enforced by the US military. Getting militarily involved in Idlib sounds too much like Clinton’s position and thus something to avoid.

Trump also has been keen to draw down US troops in eastern Syria now that the Islamic State (ISIS) is territoriality defeated, even over the advice of the Pentagon, which has warned that many ISIS fighters escaped during the final months of the anti-ISIS campaign. Indeed, differences over Syria policy seems to have been the chief reason James Mattis resigned as US secretary of defence in 2018.

After much back and forth, Trump settled on keeping about 400 US troops in eastern Syria but he does not want those troops to move into Idlib where they could come under fire and then force his hand to send additional troops to protect the force.

In other words, he sees Idlib as a potential quagmire and does not want to step in the quicksand.

Given the proximity of forces in that province — either in observation posts or on the ground — the potential for a US-Russian clash would loom large. Although Putin would likely not want a confrontation either, from Trump’s perspective it is better to stay away.

In addition, the province is reported to be governed in many areas by the terrorist group Hayat Tahrir al-Sham (HTS), which, while no match for the US military, could inflict many casualties on US personnel.

Although both Syria and Russia are opposed to the HTS and justify their military campaign as one of clearing the area of terrorists, the potential for a shooting war getting out of control, especially in a relatively small area, probably weighs on Trump’s mind.

Putin and Assad may believe there are elements in the US government that would not mind Idlib being “cleared of terrorists.” Former US envoy to the anti-ISIS coalition Brett McGurk stated last September that Idlib province is the “largest al-Qaeda safe haven since 9/11.”

Although McGurk has since resigned over differences with Trump over Syria policy, his thinking may not be an isolated one in US policy circles. Indeed, in May, Michael Mulroy, deputy assistant secretary of defence for the Middle East, stated that Idlib was “essentially the largest collection of al-Qaeda affiliates in the world.”

Outside of fomenting a humanitarian crisis, a potential drawback of the Russian-Syrian offensive in Idlib is that HTS fighters would disperse to other countries, making the counterterrorism effort to monitor and apprehend them much more difficult.

Some reports suggest that HTS is acting more as an organised crime syndicate in Idlib — for example, extorting lorry drivers — than a transnational terrorist group. Nonetheless, having the Syrians and Russians take on HTS may relieve the United States and other Western powers from taking on that job down the road.

For these reasons, Putin and Assad may calculate that despite harsh words from Trump, who may be influenced by national security adviser John Bolton (an anti-Russian hawk), at the end of the day, the US president is not going to do much to oppose their offensive.

Still, with some 3 million people in Idlib (many of them having fled there from other parts of Syria), a humanitarian crisis under Trump’s watch could redound against him. In late May, the “NewsHour” programme on the Public Broadcasting Service aired a segment of a Syrian child in Idlib saying though a translator: “We are pleading with Mr Trump, please stop the criminals from bombing our villages and to protect the Syrian people, the defenceless civilians.”

While Trump previously stated: “I stopped the slaughter of perhaps three million people’ [in Idlib] and “nobody talks about that,” he is clearly nervous about Idlib turning into a political problem for him.

Hence, Trump’s message to Putin (perhaps to be conveyed through diplomatic channels) going forward might be: in the campaign to retake Idlib for the Syrian government and to go after HTS, the Russian and Syrian military forces should desist from attacking civilians. Whether that works is another matter altogether. His public tweet has not.