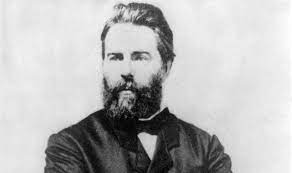 Herman Melville had it right. In the first chapter of Moby-Dick, Melville’s narrator,

Ishmael, lists three events which “Providence” had drawn up a long time ago. One of the three is

“WHALING VOYAGE BY ONE ISHMAEL.” Another is “Grand Contested Election for the Presidency of the United States.” The third is “BLOODY BATTLE IN AFFGHANISTAN,” spelled with two F’s.

In a book set at sea, the land-locked country of Afghanistan resonated with Melville enough in 1851 to identify war there as part of some cosmic certainty. (The First Anglo Afghan War – which resulted in disastrous defeat for the British – ended nine years earlier.) One hundred and seventy years later, Melville’s proclamation about Afghanistan (as well as a presidential election) continues to ring true today.

As American troops near the fulfillment of their withdrawal from the country, we would do well to consider two words that could be represented by the two F’s in Melville’s spelling of “AFFGHANISTAN.” The first F is for failure; the second is for future.

If we are to provide for an honest analysis of America’s military and diplomatic engagement in Afghanistan for the past twenty years, we must call it what it is: a failure.

There is no other word for it. The very ruling power ousted by American and Afghan forces in 2001 is, once again, on the threshold of power in Afghanistan. Indeed, over half of the districts in Afghanistan – and 11 of 34 provincial capitals – are now controlled by the Taliban. Recent comments by the U.S. Special Inspector General for Afghanistan Reconstruction (SIGAR), John Sopko, call out the “hubris” and “mendacity” of American political and military leadership as elements of this failure.

Yes, there were many tactical successes. We got our white whale in the form of Osama bin Laden in 2011. We largely defeated, disrupted, and destroyed al-Qaeda. Much national (as well as local and international) blood and treasure were spilled in striving towards these objectives. Schools were opened, women once again became a force in public life, a democratic government took root. The seeds for a post-Taliban Afghanistan were strewn far and wide – but not always to good or lasting effect. With the American and international withdrawal, whatever safeguards that did exist are now noticeably absent. Twenty years from 9/11, the same militant group that hosted al-Qaeda – and could well host other terrorist organizations – is making gains across the country in a nightmarish replay of 1994, 1995, and 1996 – condensed into months, weeks, and days.

Of course, there will be plenty of blame to go around when more time has passed from this war. Pointing fingers while Taliban fighters are pointing guns at civilians, however, doesn’t do anyone any good. For now. Recognizing the failure of American engagement in Afghanistan for the past twenty years is a necessary step in recognizing the responsibility it has for the current state of affairs. This sense of responsibility can better inform decisions to be made to support the second of the double F in Melville’s “AFFGHANISTAN”: the country’s future.

Currently, that future is looking increasingly like a return to Taliban rule. The recent gains of the Taliban have been made with all the maniacal zeal of Ahab, hell-bent on establishing their perverse concept of heaven on earth in Afghanistan. There is no accommodation, no lesser whale, that slacks the thirst of the Taliban’s militant millenarism. The Taliban of today is the Taliban of yesteryear. To think otherwise is to neglect reality. The futility of the Doha Peace Talks reflects the indifference of the Taliban to any future for Afghanistan other than their own.

We can’t look to the future of Afghanistan without looking to the East. Despite Prime Minister Imran Khan’s assertions to the contrary, Pakistan aided, abetted, and enabled a Taliban resurgence in the first place. Pakistan has provided the sustenance of the Taliban to endure and return to Afghanistan all in the name of “strategic depth” against its own neighbor to the East, India. The hand-in-glove economic partnership that has developed between Pakistan and China in recent years, centered on China’s $62 billion investment in the China-Pakistan Economic Corridor (CPEC), underscores the interest the Pakistani government has in ensuring a stable, pliant neighbor.

Importantly, the United States must stay engaged. Despite reports about potential further drawdowns in staff, the United States needs to maintain its embassy in Kabul. To shutter diplomatic operations there would mean that the United States would have no diplomatic presence in Syria, Iran, and Afghanistan. The lack of visibility and on-the-ground understanding that would come from such a departure would be detrimental to long-term American interests, while also hindering our ability to positively support the Afghan government, military, and people. Afterall, we should know, because we’ve done it before. The U.S. Embassy in Kabul was closed between 1989 and 2002, a pivotal time when threats to American interests were plotted on Afghan soil.

In addition, thought must be given to the possibility of an airlift to maintain support to a democratic government in Kabul and the people of Afghanistan. The United Nations High Commissioner for Refugees (UNHCR) oversaw the “longest-running humanitarian airlift in history” in Sarajevo from 1992-1996, sustaining that Balkan capital during the Bosnian War. It is not unimaginable that a similar situation could arise in Kabul. While competing interests among members of the UN Security Council might make meaningful resolutions difficult to come by – and concrete action even harder – the UNHCR and UN member states can play a role in ensuring a lifeline to the Afghan people if the situation demands it.

Still, a Taliban takeover of Afghanistan is not inevitable. The memory of a people who lived under the regime before cannot forget the ills the Taliban brought upon their country. The Afghans who took to the streets and balconies of Kabul in the aftermath of a Taliban car bombing on August 3 in the capital represent an Afghan populace who will not acquiesce. There is still time to ensure the perpetuity of democratic governance in Afghanistan rather than accept the last twenty years as some bloody interregnum for a theocratic regime.

The “BLOODY BATTLE IN AFFGHANISTAN” does not need to be perpetuated forever. In the near term, however, it looks like Melville’s premonition will persist.

David Peduto is a Fellow at the Lobo Institute, a writer, researcher, and public speaker who specializes in the Middle East. An Arabic speaker, David seeks to dismantle pervasive stereotypes about a language, a people, and a religion so as to see challenges and opportunities more clearly. He currently works for a security intelligence firm, and previously worked for a crisis response management company. His work has taken him to Pakistan, Thailand, and the Philippines, among other countries.

David is a graduate of Middlebury College, The Fletcher School of Law & Diplomacy at Tufts University, and (somewhat improbably) an alum of the Improv Asylum’s Improv Comedy Training Center in Boston.

At Middlebury, he wrote a thesis examining the reasons behind the Taliban resurgence in post-2001 Afghanistan. At The Fletcher School, he continued his Middle Eastern studies with a focus on conflict negotiation and resolution, U.S.-Iran relations, and extremist ideology. At the Improv Asylum, he learned the art of accepting the new reality from others far funnier than he is.