A case for the stoic soldier 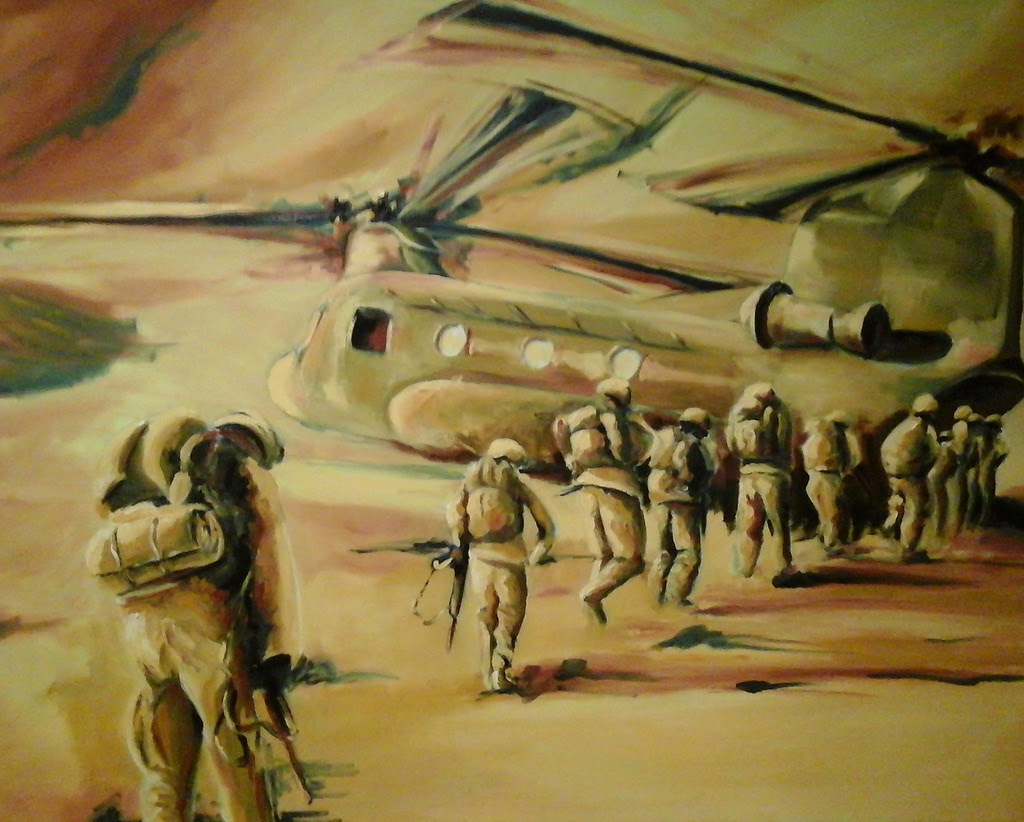 As published by ABC News by Mick Mulroy

Much is being written today about the changing characteristics of modern warfare as a consequence of revolutionary technological innovations such as artificial intelligence, unmanned systems, and the access and use of outer space.  These developments will undoubtedly impact how war is fought. They will not, however, alter war’s fundamental nature that is unchanged since the dawn of human civilization.

War’s unalterable essence still requires soldiers to possess critical attributes of physical and mental fitness, discipline, and the will to fight and never quit – often against overwhelming odds. Georgetown philosopher Dr. Nancy Sherman argues that these qualities – central to Stoicism – comprise the mindset needed for military forces. Her work details how the Stoic concepts of anger, fear, resilience, mourning, and brotherhood can be incredibly helpful for contemporary and future warriors. Consequently, she recommends the military embrace the Stoic approach to combat, while tempering the warrior spirit with humor and humility.

Though many service members may not be formally educated in the tenets of Stoicism and the works of Epictetus or Seneca, their attitudes and way of thinking resonate with the basic tenets of the philosophy often due to their military training.

Stoicism was developed during a period of near-constant war in the third century B.C.E. at the philosophical center of the Greek world – Athens. Stoics taught that your wealth may go up or down, careers may falter or succeed, but none of these changes truly matter because material wealth is not that important. What matters is being just, being wise, and having courage. All these components help a person deal with uncertainty and especially danger — the kind that military professionals face regularly.

This paper explores the importance of Stoicism to the warrior mindset, to the mental well-being of our fighting men and women, and the effective use of military force according to our society’s values. It argues for a more conscious and formal adoption of Stoic principles into the core of the American military profession and specifically addresses the Stoic view of anger, fear, and the concept of universal brotherhood.

Entering the world of Epictetus

During a September 1965 flight over North Vietnam, Stockdale’s A-4 Skyhawk aircraft was struck and completely disabled. He ejected and parachuted to the ground. As described in his book, Thoughts of a Philosophical Fighter Pilot, before landing, he whispered to himself, “Five years down there, at least. I’m leaving the world of technology and entering the world of Epictetus.”

Stockdale was held as a prisoner of war for seven and a half years, including four in solitary confinement He was repeatedly tortured — his arms were torn from their sockets, his back broken and his legs injured so severely that he walked with a painful limp for the rest of his life. He said Stoicism,  specifically Epictetus’s Discourses, was the key to his survival.

Epictetus believed one should not fear death because it was inevitable. The only choice we have is how we will live. He also believed adversity would inevitably happen to people, so it was how you dealt with that adversity that mattered. Your response to that adversity is the only thing you can control.

During his time in captivity, Stockdale worked hard to maintain the morale of his fellow prisoners. When they were tortured, he told them they should not feel guilty if they had broken and that everybody breaks eventually. Epictetus wanted to free men of guilt like this. Once your actions are behind you, it is out of your control.

After four years of isolation and torture, Stockdale tried to kill himself with shards of glass. A fellow prisoner scratched out lines of the poem Invictus where he knew Stockdale would see it. A poem known by Stoics everywhere. The last two lines were, “I am the master of my fate. I am the captain of my soul.”   Stockdale never attempted to kill himself again.

On anger and fear

The Stoic ideal is a person in control of their emotions, making rational decisions based on facts. Stoicism is famous for promoting the image of a warrior standing stone-faced in battle despite the passions unleashed by mortal combat. The Stoic philosopher Seneca wrote extensively on the topic of anger, its negative consequences, and techniques to avoid those consequences. Uncontrolled anger leads to bad decisions. For this reason, these techniques are helpful for soldiers, sailors, airmen, and marines in combat.

Military training attempts to remove emotion from tactical responses and operational decisions by repetition in realistic scenarios. People who have been in combat commonly note how impressed they were with others who maintained their “coolness” under pressure as opposed to those who went into a rage — an uncontrolled emotion. Conversely, rage has often become a factor in many of the war crimes we have seen in the United States and around the world. Controlling emotions through the practice of Stoic techniques could serve as a key aid in preventing similar tragic events in the future.

Seneca also addressed the other unhelpful emotion for warriors – fear. “Two elements must therefore be rooted out once for all — the fear of future suffering, and the recollection of past suffering; since the latter no longer concerns me, and the former concerns me not yet.”  Perhaps this was the intent of President Franklin Delano Roosevelt when he said in 1933, “the only thing we have to fear is …. fear itself.”

Seneca’s counsel on controlling fear easily applies to warfare. The build-up to an operation includes extensive planning, preparation, and rehearsal. All these seek to limit the unknown – a key contributor to fear. Extreme fear can cause paralysis in battle, leading to defeat. Consequently, warriors must practice the discipline of controlling fear to engender courage.  In my own experiences on the battlefield, I have seen heroism and people overcoming their fear – the essence of courage – in the direst of circumstances.

I once watched two of my friends engaged in fierce combat from video recorded from an aircraft overhead. One of them was engaged by heavy enemy fire and was severely wounded. Despite his wounds, he continued to fight, calling out the location of the enemy to guide friendly forces. My other friend, in a moment of pure courage, selflessly rushed through withering fire to come to our comrade’s aid. Side by side, they fought to the end and now are buried next to one another in Arlington National Cemetery.

Others who observed the actions of these two courageous men – all of them combat veterans – hoped they would have shown the same level of courage had they been in that situation. To run into the fray to save a friend is the height of valor. Overcoming fear is what we respect most in our military and sets apart a great military from a good one.  The best weapons and technology are critically important, but the will to fight, largely rooted in courage, is required for victory.

We highlight acts like these to get our young soldiers, sailors, airmen, and marines to emulate them. Service members need to understand that fear can be overcome in an act of courage. Stoicism is one of the few philosophies that directly addresses the overcoming of fear, explaining why many in the military follow it and why many advocate its adoption in the formal training of military professionals.

One distinct concept of Stoicism is the idea of Universal brotherhood (and sisterhood). It is a complex concept but generally speaking it holds that all people are part of something much bigger than themself. That rank, race, ethnic groups, wealth, or other external divisions don’t really matter. It is therefore completely counter to things like racism, xenophobia, narcissism, and sexism. It holds that your service is beyond just what is beneficial to you.

Soldiers may join the service for lofty patriotic goals. But they fight for the soldier standing next to them. The brotherhood and sisterhood of the profession of arms outlast any one person. This was the point of Gunnery Sergeant Hartman in Stanley Kubrick’s movie Full Metal Jacket, “Today, you are Marines. You’re part of a brotherhood. From now on, until the day you die, wherever you are, every Marine is your brother. Most of you will go to Vietnam. Some of you will not come back. But always remember this: Marines die. That’s what we’re here for. But the Marine Corps lives forever and that means you live forever. ”

While I do not agree that Marines are here to die, I (and most marines I know) agree that if the Marine Corps lives forever, marines do as well. The Marine Corps may be an extreme example of camaraderie, and proud of it, but every service in the U.S. military holds this value as do the best military units around the world. Regardless of differences, all American warriors are part of something larger than themselves. These shared concepts mutually support one another and further add to the argument that Stoicism should be the official philosophy of the military.

Stoicism provides a basic set of values: courage, justice, and wisdom and seeks to control the rash impulses of anger and fear. It helps our service members deal with decisions in complex circumstances with dire consequences with maturity beyond their years. Stoicism may also add to our troops’ sense of belonging to something larger than themselves, helping them cope with the loss of their brothers and sisters in arms.

Society has a set of values that we expect our military to live by. It is one thing to dictate those values and another to provide the means to help our military deal with the extremes of anger that lead to war crimes and harm to innocent civilians. We owe our service members more than just the best weapons and equipment to operate on the battlefield. We must provide them with a pragmatic and applicable philosophy that can fit with any background or religious belief. We should embrace Stoicism and formalize it in our military training.

Michael “Mick” Patrick Mulroy is the co-founder of Lobo Institute, a consulting firm, advising, and teaching on current and future conflicts. Mulroy is a former United States Deputy Assistant Secretary of Defense for the Middle East, a retired Central Intelligence Agency Paramilitary Operations Officer, and a U.S Marine. Also, he is a Senior Fellow for National Security and Defense Policy at the Middle East Institute, a member of the Board of Directors for Grassroots Reconciliation Group, a nonprofit to help rehabilitate child soldiers in Africa, the co-founder of End Child Soldiering, a nonprofit to help rehabilitate child soldiers globally, and an ABC News National Security Analyst.