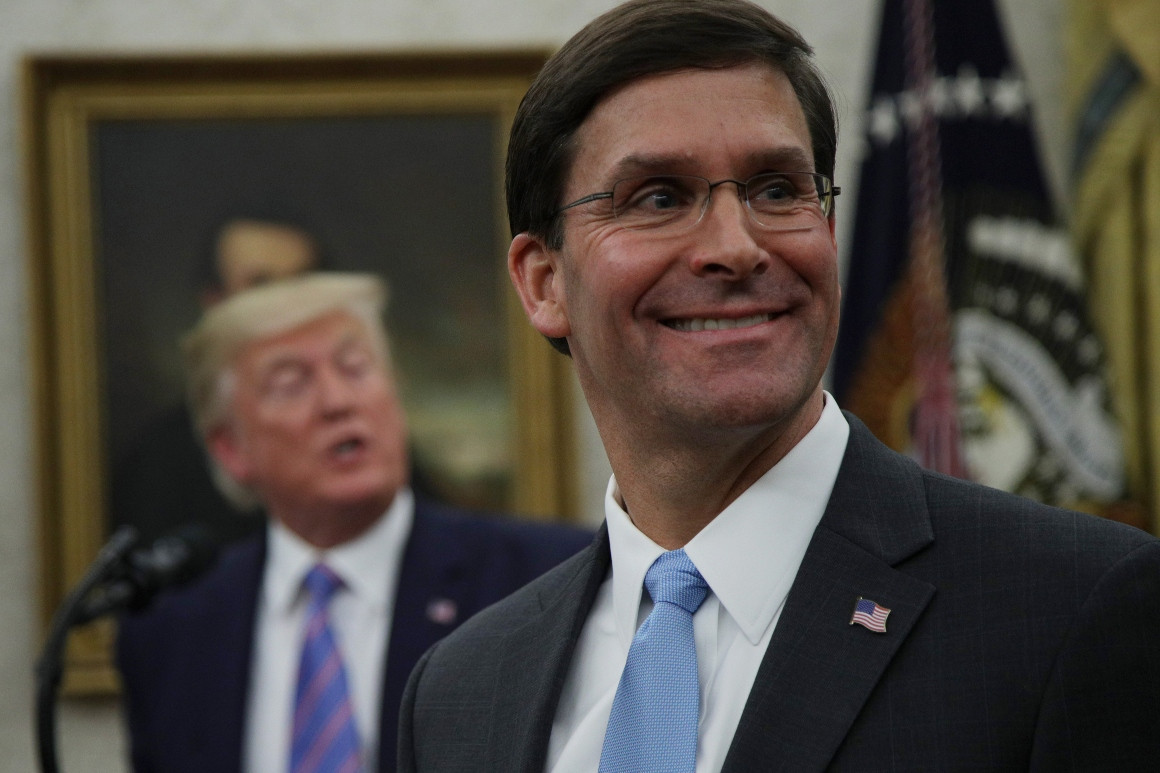 As published by Politico by Lara Seligman

The Pentagon’s top military leaders are under quarantine. The president’s case of coronavirus is prompting concern that the U.S. is vulnerable to adversaries. And the election is stoking fears of more unrest in America’s cities.

But Defense Secretary Mark Esper is rarely seen in the capital these days.

He’s been to North Africa, the Mediterranean and spots throughout the U.S., spending almost half of the past two months on the road. Esper is largely expected to be gone from the Trump administration after the election, and critics say he’s avoiding Washington at a time of crisis. And he’s planning yet another trip this month.

“Senior leaders should stay in Washington because of the concern about continuity of government with the condition of the White House and our senior military leaders,” said Mick Mulroy, an ABC News analyst who formerly served in the CIA and at the Pentagon until late last year. This would also serve to “send a message to any adversary that may want to exploit the situation.”

Miles Taylor, former chief of staff of the Department of Homeland Security under Trump, slammed the administration as a whole for its lack of outward concern about continuity of government amid the president’s illness. Esper and the rest of Trump’s national security team should have convened daily meetings and more closely coordinated their travel schedules “to ensure the uninterrupted function of the federal government,” he said.

“That doesn’t appear to have happened. And as a result, the United States has — in the eyes of our adversaries — appeared more vulnerable,” he said.

Esper has set a breakneck pace of travel since the summer, just days after clashing with Trump on a host of issues, from his public opposition to deploying active-duty troops to quash civil unrest in American cities to his support of a military-wide ban on the Confederate flag. Trump has made his irritation clear, publicly deriding his defense secretary as “Yes-per” and reportedly discussing replacing him.

Pentagon spokesperson Jonathan Hoffman defended Esper’s busy schedule, noting that travel is a “regular obligation” for a defense secretary “responsible for millions of people stationed in every state and across more than 100 countries.” The Pentagon has “adapted” to the Covid-19 environment so that Esper can safely continue his regular meeting and speaking engagements, he added.

“Even through the challenges presented by COVID-19, the Secretary has seen great value in his recent trips – especially those in which he continues to engage our nation’s partners and allies and meet with military members and their families,” Hoffman said.

At all times while on travel, Esper “remains in full command and control of our armed forces and is in constant communications with the Pentagon and the White House,” he stressed.

But the secretary’s frequent absence amid persistent rumors that he will either quit or be fired after the election is viewed by many inside and outside the administration as a way to avoid the president’s wrath.

“The further away, the less likelihood of being fired,” said Mark Jacobson, assistant dean for Washington programs at the Maxwell School and Syracuse University who served in DoD and as a Senate staffer. “That’s my take – you stay out of the line of drive-by fire.”

Even when he is in Washington, Esper has been focused on issues unlikely to irk the president or cause public controversy, such as crafting next year’s budget request, countering Chinese influence and growing the Navy.

Just this week, Esper landed Sunday after a trip to North Africa and popped up at a think tank event on Tuesday to lay out plans to increase the size of the Navy. He did not address the Covid scare affecting the nation’s highest military officers and took no questions from the audience.

“Now is precisely the time for [Esper] to publicly reassure the country and the world of DoD’s readiness and preparedness; that well-established processes and procedures are in place to ensure the U.S. military is fully ready to carry out its duties and responsibilities,” said retired Col. Dave Lapan, who served as spokesperson for DoD and later for the Department of Homeland Security in the Trump administration. “He needs to reassure Americans and our allies and warn our adversaries not to seek to exploit the situation.”

Esper has also stopped talking to reporters who are traveling with him. His last on-the-record interview to the traveling press was July 22, when he refused to answer questions from The Associated Press about law enforcement dressed in military uniforms during protests in Portland, Ore.

When news broke on Oct. 2 of Trump’s Covid diagnosis while Esper was in Morocco, reporters traveling with him repeatedly tried to get the secretary to comment on the president’s health. But Esper avoided them for several hours after the president’s tweet.

Later, Esper posted a message on Twitter expressing his well-wishes: “Leah and I send our heartfelt thoughts and prayers to @realdonaldtrump and@FLOTUS for a swift recovery,” he tweeted.

And as of Wednesday afternoon, he had yet to address the Joint Chiefs quarantine. It’s a situation that Esper should address personally — not through a spokesperson, Lapan said.

The defense secretary has at least one more overseas trip planned before the end of the month, U.S. officials said. Despite constraints on travel due to the pandemic, Esper embarked on at least two domestic trips in June, and one domestic trip and one overseas trip each in July, August and September. His most recent trip, from Sept. 29 to Oct. 4, included stops in Tunisia, Algeria, Malta and Morocco. He was in Morocco when the president was diagnosed with Covid-19, and extended his trip to include a final stop in Kuwait at the White House’s request.

Inside the administration, there is a sense that Esper is deliberately trying to stay out of the president’s way in the run-up to the election.

Esper’s frequent travels are a way to “avoid controversy until he quits or is removed,” said one administration official.

About his recent trip to North Africa, one defense official said: “it was long overdue. But he probably senses he’s running out of time so [he is] knocking it out now.” In Tunisia and Morocco, Esper signed “roadmap” documents to chart bilateral military cooperation.

Sensing that he may be “on extremely borrowed time,” Esper is working to complete key agenda items as quickly as possible, said another defense official.

Staying away from Washington in the weeks leading up to a heated election may also be designed to avoid politicizing the military, experts said. While other Cabinet members made speeches at the Republican National Convention last month, including Secretary of State Mike Pompeo, who addressed the audience from Jerusalem, Esper was absent.

The defense secretary is likely trying to avoid a similar situation to the one he found himself in this summer, when he faced a barrage of criticism for posing for a photo with Trump and other senior officials after law enforcement cleared Lafayette Square of protesters. Prominent former national security officials, including Esper’s predecessor Jim Mattis, denounced the incident.

“We know that we are better than the abuse of executive authority that we witnessed in Lafayette Square,” Mattis wrote in a blistering statement. “We must reject and hold accountable those in office who would make a mockery of our Constitution.”

Top Cabinet officials must make clear that they are focused on their main mission, rather than politics or the election, Lapan said.

“The American people, and the world, need them to project stability and reassurance, not chaos,” he said.